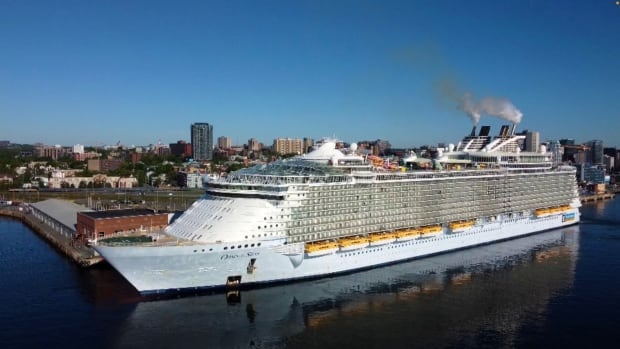 Cruise ships bring a lot of business to Halifax – plus pollution from dirty fuel, critics say

The arrival of cruise ships is boosting sales at Mimi Fautley’s knitting supply store in Halifax, but the business owner says undocumented pollution from the industry worries her.

Fautley estimates that cruise ship passenger sales account for 10-20% of The Loop’s summer revenue. But, without publicly available data, Fautley said she had to speculate on the level of pollution the ships are bringing into the community.

The Port of Halifax does not currently track cruise ship emissions.

“There are issues around cruise ships [that] I feel like I was ignored back when we also became dependent on them,” she said. “I think we really need to start measuring the amount of emissions in the city… over time and how it changes when the cruise ships are here.”

About 150 cruise ships should dock in Halifax this season, down from 179 the year before the industry’s two-year hiatus in Canada due to COVID-19 restrictions. The Port of Halifax estimates that in 2019 the economic impact of the cruise industry in and around Halifax was $165 million.

The sector has been criticized by environmental groups for its record of air and ocean pollution. A 2019 study found that passengers and staff aboard four cruise ships were likely exposed to high levels of particulate pollution from ship exhausts.

Hrvoje Carić, a researcher at the Institute of Tourism in Zagreb, Croatia, argued that the cost-benefit relationship between cruise tourism and coastal communities has deteriorated over the years as ships have grown.

“They tend to mimic destinations,” Carić said. “So cruise passengers are not leaving and spending as much money in one port – in one destination – as they did maybe 10, 15, 20 years ago.”

Carić is one of the authors of a recent report on the impacts of cruise tourism on the environment and human health.

Most cruise ships run on heavy fuel oil, a derivative of cheap crude oil rich in pollutants that have been linked to acid rain, ocean acidification and various health problems, Carić’s report notes.

International regulations introduced in 2020 reduces the permitted sulfur content of marine fuel oil to a level below what is typical for heavy fuel oil.

In an emailed statement, a spokesperson for Transport Canada said the department was working on an approach to reduce scrubber releases.

“Transport Canada recognizes the concerns about scrubber washwater discharges into Canadian waters and continues to study the environmental impacts,” he said.

Donna Spalding, spokeswoman for the Cruise Lines International Association – the world’s largest cruise industry association – said the industry was focused on transitioning to liquefied natural gas (LNG) and other more fuels. clean for its new ships. The association has approximately 270 vessels in its fleet.

Spalding said members currently have four LNG-powered ships and 22 more on order, adding that some ships that use heavy fuel oil also carry low-sulphur fuel for use while idling in port. She could not provide a breakdown of the number of vessels using other fuels.

In 2014, the Port of Halifax shore power implementeda technology that allows cruise ships to turn off their auxiliary engines and plug into the power grid while in port.

The system can accommodate one vessel at a time, and only properly configured vessels can plug in, said Halifax Port Authority spokesperson Lane Farguson.

He said the system can be expanded to accommodate more vessels if there is demand from industry.

Carić said these systems are only as clean as the grid that powers them.

Since Nova Scotia’s main source of electricity is coal, he said plugging in is “not a big improvement” over idling.

Carić said it should be up to governments to provide accurate information on the economic and environmental impacts of cruise ships.

Monitoring and enforcement are lacking in Canada

“You can have all the regulations you want,” Klein said. “But unless you actually observe, monitor and apply, it means nothing.”

Klein has documented hundreds of environmental violations and fines from media reports and public documents on his website, cruisejunkie.com.

The fines range from violating water quality standards to a $40 million fine against Carnival Corp. in 2019 for discharging oily waste from its Princess Cruise Lines ships and concealing it.

He named Alaska, where onboard observers ensured compliance from 2006 to 2019, as “probably the most effective model of surveillance” he has seen in action around the world.

Klein noted that relatively few violations have been reported on Canada’s Pacific coast.

“I guess the ships do well when they’re in Canada,” he said.

Transport Canada says it has no plans to add observers on board cruise ships.

The Port of Halifax is considering expanding the use of a new rebate program to cruise operations to reduce emissions, Farguson said. It rewards low-emission freighters with an incentive of $500 to $1,000.

Fautley said she would like the figures for cruise-in-port emissions to be made public.

“I think the only reason we don’t talk about it is because people don’t know those numbers,” she said.

“I would like to know if we understand what the impact is of the frequent arrival of these ships.”

She added that she wants to see Halifax play a bigger role in advocating for the mitigation of the environmental impacts of cruise tourism.