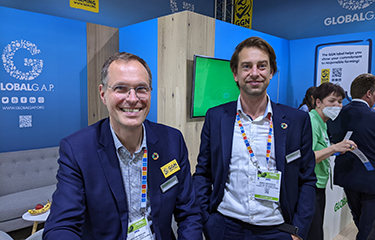 GlobalG.AP launched its first aquaculture standard in 2004, with a particular focus on salmon. In 2011, it changed its standard in to one that can be applied to any fish production system, and its latest standard has continued to evolve on this system.

Remko Oosterveld, aquaculture expert at GlobalG.AP, told SeafoodSource at Seafood Expo Global 2022 in Barcelona, ​​Spain that this new set of standards takes a more forward-looking stance on how his organization’s sustainability certification can apply to aquaculture, and beyond. .

The standard is the product of more than two years of work, he said, involving numerous stakeholder meetings and public consultations that included 485 comments that the organization considered.

While within GlobalG.AP aquaculture is a relatively small business – the company certifies over 200,000 agricultural businesses in 140 countries, compared to just 350 aquaculture producers – on the global stage it represents 2.5 million metric tons of seafood production in 34 countries.

“Even though aquaculture is a relatively small business for GlobalG.AP, it is still very important,” Oosterveld said.

Much of the new standard – officially released on April 26, 2022 and called Integrated Farm Assurance (IFA) v6 – has two parallel editions: IFA v6 Smart and IFA v6 GFS. The “smart” version of the standard is suitable for most growers, according to GlobalG.AP, while the GFS standard is for producers who need to be recognized by the Global Food Safety Initiative (GFSI).

Stakeholder feedback is a key reason why certification now has two tiers of standards, he said, because not all producers need to meet GFSI rules and regulations.

“GFSI, they have a set of regulations and rules that any standard that wants to be recognized must comply with, and the GFSI has adopted some rules and regulations that GlobalG.AP believes in – and this is also due to feedback from our stakeholders — which is not applicable or accessible for all growers,” Oosterveld said.

“An unannounced audit, by definition, cannot be announced, and that could be, for some aquaculture producers, a bit of a tricky thing, because how can an auditor who comes unannounced, how can he be transported safely in a net pen? said Oosterveld. “He needs a boat, and he needs protective clothing and so on. So that’s something our stakeholders are complaining about and saying, “OK, that’s not doable.”

The standards are the same Oosterveld said, the only difference between the two versions being the rules by which they are executed.

“Even a [IFA v6] Clever-The certified producer can still provide a lot of assurance on the food safety aspect, but simply cannot show that the processes are GFSI recognized,” Oosterveld said.

One of the main aims of the new standard is to evolve the way aquaculture operations can demonstrate compliance with certification standards using the many modern tools now available to fish farmers, said Oosterveld.

“Clearly, farmers have more digital tools. So they have their smartphones, sensors that continuously record things like water quality, and they have a better record of production processes,” he said. “There are more ways available for a farmer to show compliance.”

With these new methods of proof of compliance in mind, GlobalG.AP has also changed its standard to focus more on the Principles and Criteria. The goal, Oosterveld said, is to have a more results-based approach instead of looking for specific metrics like the organization had in its GlobalG.AP Version 5 standards.

Another key addition is additional animal welfare standards, he said.

“Animal welfare is a hotly debated topic right now, so we’ve tried to incorporate those comments into the aquaculture standard as well,” Oosterveld said.

The GlobalG.AP standards already contained guidance on animal welfare – Oosterveld said around 20% of the checkpoints were related to animal health and welfare. But the new standards have increased the required assurance levels of checkpoints, meaning the standard is more rigorous, he said.

Also on the animal welfare front, there is an upcoming ban on eye stalk removal from shrimp from 2024. Eye stalk removal is a widely practiced method to encourage greater egg production in female shrimp by removing one or both eye stalks from a shrimp.

“It was the result of a meeting we had with a particular state retailer,” he said.

GlobalG.AP already had a checkpoint stating that animals should not be harmed unnecessarily, and although common practice, eye stalk removal is not strictly necessary for shrimp farming, it said. he declares.

“We’ve had feedback that farmers are able to get away with eye stalk removal, but that means they need better management practices,” Oosterveld said. “But we’ve also found, through research, that females that aren’t ablated produce more robust eggs and are less likely to die from stress.”

The development of the new standard by GlobalG.AP was guided by a fundamental desire to create tools that allow aquaculture operators to improve their processes, said Oosterveld.

“We wanted to create a tool that would allow growers to be more efficient in using their natural resources,” he said. “The goal is to provide growers with data to help them make decisions.”

An example of this process is the data that GlobalG.AP collects on greenhouse gas emissions, the amount of fish oil in feed, feed conversion rate and mortalities, Oosterveld said. This data can then be aggregated into averages that growers can use to compare themselves to ensure they are operating at an optimal level.

“They can see, ‘OK, I have higher mortality than similar growers in the same area,'” he said. “That might trigger for them, ‘OK, I need to work on biosecurity.'”

GlobalG.AP hopes this will lead growers to adopt more sustainable practices, he said.

“We have tried to develop a standard that is fit for purpose, but can also be used as a guide for producers to manage things, taking into account food safety, environmental, health and safety aspects. animal welfare, and workers. “Occupational health and safety,” Oosterveld said. “It’s further verification, and independent verification, that practices are being done responsibly.”

Derecho could be one of Canada’s costliest convective storms