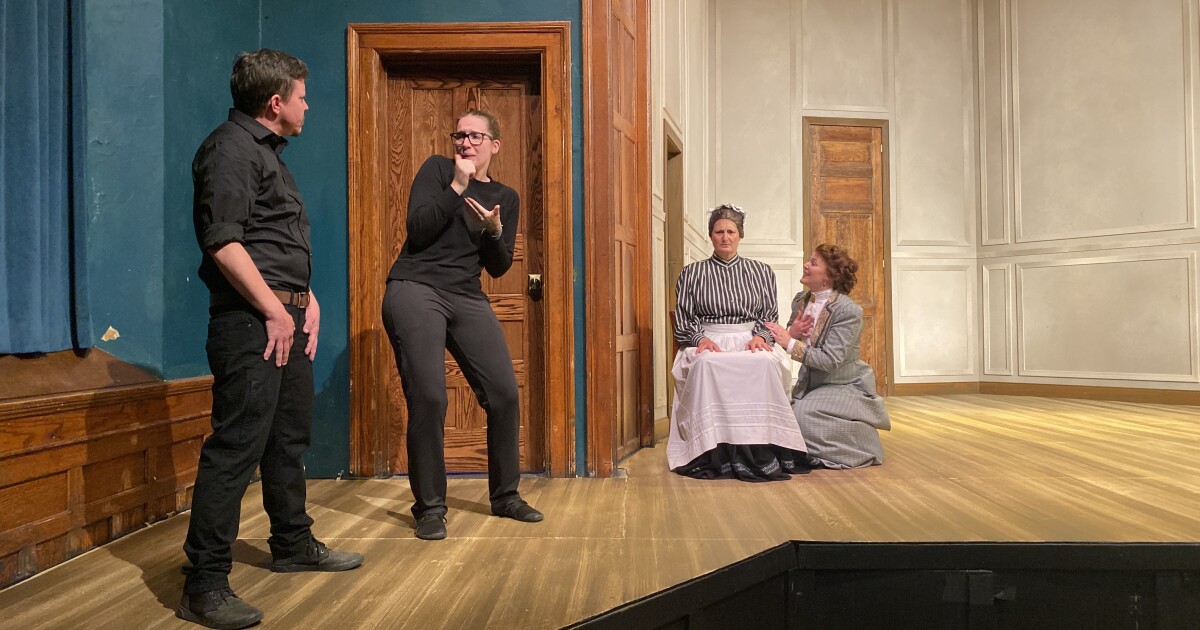 Grandstreet Theater will integrate ASL interpreters during the Saturday show

HELENA — For thousands of hard of hearing Montanese, closed captioning is one of the few ways to consume media. However, this is not an option for live performances, such as a play at the Grandstreet Theater in Helena.

So Grandstreet Theater is doing something different for its new play, “A Doll’s House, Part 2”, by incorporating American Sign Language interpreters into one of its shows.

“Honestly, we should have done this a lot sooner,” said Grandstreet creative director Jeff Downing. “I think with fairly minimal effort, we can hopefully have quite a positive impact on the Deaf community here in Helena, and hopefully nearby towns can benefit from this performance as well.”

Downing has been with Grandstreet for a decade and said that while he’s not sure if this is the first time in theater history, it’s the first time they’ll include ASL performers at a show during his tenure and was triggered by a member of the theatre.

“Mackenzie Jones, she was in Matilda, the last spring musical we did a few months ago. And she said, “Hey guys, how about we work to make this happen?”

Jones, a theater interpreter in her spare time, works in the disability and health field and says she believes providing a service like live theater interpreting is a vital addition to the community and does not should not be limited to ASL interpreters.

“I truly believe that theater is part of our mental well-being and our cultural and social well-being. So being able to bring live theater to a group of people who otherwise couldn’t fully participate, either through ASL interpreters, or perhaps in the future to have audio descriptions for people who are blind or visually impaired, or even having an inclusive sensory production that allows people with autism or other developmental disabilities to participate is so important to reaching people in Montana and bringing live theater to our community,” Jones said.

While it is unclear whether there are plans to include other methods of making live theater more accessible to Grandstreet in the future, two ASL performers will be on stage with the cast for the theater performance on September 10.

Dana Walls is one of the performers on the show and says it’s a big step in the right direction for the theater to make its productions more accessible to a variety of Montana communities.

“Access to the community is obviously hugely important. It’s critical that people have the opportunity to enjoy the arts, however they identify themselves,” Walls said.

He also says he hopes this is just the first step towards live theater accessibility.

“My white whale would be for us to perform all the performances on offer, but particularly the winter and summer performances which tend to be a bit more child friendly. My aim would be that then the [Montana] The school for the deaf and the blind… would then be able to load these kids, bring them here, have the kids come in to see a full interpreted performance and have a discussion afterwards. Maybe with the director or the actors, and ask whatever questions they have and again, get the young people interested and excited with the theater that’s accessible to them in their language,” Walls said.

For those interested in view tickets to the live ASL rendition of “A Doll’s House, Part 2” which will take place on the left side of the stage when viewing from the audience, tickets can be found at the Grandstreet Theater website. .

4 digital advertising predictions for next year