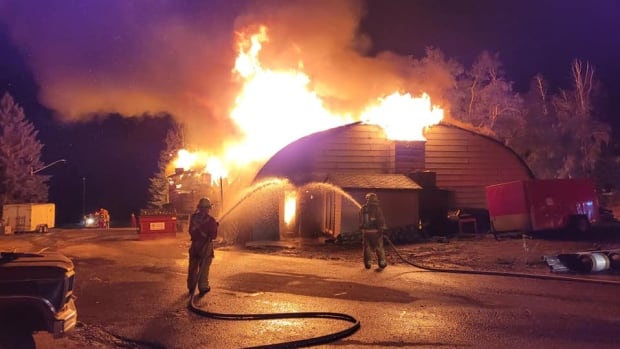 A business owner in southeast Saskatchewan feels “stomachache” after watching his restaurant burn to the ground late Friday night.

Dale Orsted is the owner of the Moosehead Inn in Kenosee Lake, a well-known Saskatchewan haunt “known for its resident ghost” according to the hostel website.

As of Saturday morning, there was not much left of the village restaurant and cabaret, about 180 kilometers southeast of Regina and surrounded by Moose Mountain Provincial Park.

While her family is safe, the restaurant is “a total loss,” Orsted said.

Orsted said he doesn’t know how the blaze started.

“All we know is around 11:30 am [p.m.] we heard loud, almost like cutting noises, like someone was chopping down trees. “

When he got up from bed in his next house and looked out the window, he saw fire going through one of the windows of the Moosehead Inn.

The family ran outside to grab a garden hose, but there was already “a pretty big fire inside,” Orsted said.

He believes the fire started in the bar of the building.

The fire spread quickly inside the building: owner

The Orsted House is directly across from the Moosehead Inn. Firefighters prevented the fire from spreading to his house and a neighboring house.

“There was a lot of heat, you know, coming from across the street,” Orsted said, which “melted our mailbox from home”.

He says that after the Moosehead Inn closed on Friday at 9 p.m., his wife stayed in the restaurant until about 11 p.m. to prepare the pizza dough for the next day.

Just half an hour after returning home, the family noticed the fire, Orsted said.

While he said the fire “didn’t look so bad” initially when firefighters arrived around midnight, it quickly spread into the old wooden building.

“They said it looked like it was just a small fire in that room, but it spread so quickly that it destroyed the whole building.”

The bar has just reopened in July

The fire department was still on the scene when CBC spoke to Orsted just before 10 a.m. on Saturday.

The fire crews “brought in a big loader, like a big shovel,” Orsted said. “Now they’re just flipping the building over on itself, in the basement.”

The Moosehead Inn was just getting back on its feet after surviving months of the COVID-19 pandemic, he said.

The Morning Edition – Saskatchewan5:24Ghost at the Moosehead Inn

When people come to the Moosehead Inn in Kenosee Lake, they can get more than just a slice of pizza. Owner Dale Orsted says he and others have experienced hauntings. 5:24

The business has had a “terrible” year due to COVID-19, with the bar closed for about 22 months.

“When the masking policy was lifted [in July], we were actually pretty busy, “he said.” People came in early, just nine o’clock when we opened, and the crowds were back. “

Now Orsted has said he plans to clean up the stage, sell the property and then “move on.”

Good memories for a former employee

The owners weren’t the only ones shocked by the destruction of the Moosehead Inn.

“It was like a punch,” said Brad Chapman, a former Moosehead Inn employee who heard about the fire early Saturday morning.

Chapman has lived in Halifax for about 18 years, but he still has many fond memories of his work in Kenosee Lake.

Chapman said he started working at the Moosehead Inn “as a guy who made ice cream, juice and soda,” and eventually made it into a bartender.

“Everyone knew my dedication to this place.”

The Moosehead Inn has always been a nice place to stay, Chapman said, even before Orsted took over in 1990.

According to the Virtual Saskatchewan website, the Inn was built in the late 1960s by Ethel and Archibald Grandison.

“When the Grandisons owned it back then, they always made sure the children and youth had a place to go,” Chapman said.

Chapman said he was grateful that no one was injured during the blaze.

“My heart is with Dale, his entire family and all of the alumni and staff who worked there before,” Chapman said.