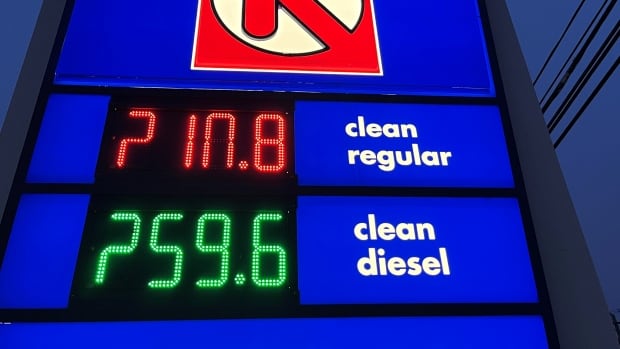 Skyrocketing gas prices push many Canadians to their financial limits. Usually, when this happens, the pain at the pump is offset by a growth spurt in the Canadian economy. High oil prices once meant increased investment and hiring.

“Typically, when oil prices rise, Canadians are a bit relieved at the pumps because of the rising Canadian dollar,” said CIBC chief economist Avery Shenfeld.

“In this case, the Canadian dollar is not following oil prices, in fact it is moving in the opposite direction right now and that adds to the pain that many households are feeling.”

The loonie usually rises on expectations that Canada’s oil sector is about to embark on a spending spree, but this time it’s a bit more cautious despite record profits.

The last time the world oil price soared this high, starting in 2008, there was a surge in investment and a hiring boom. Commodities expert Rory Johnston says years of low prices and weak profits have made companies reluctant to move too fast this time.

“There have been a lot of scars over the past decade,” said Johnston, author of the Commodity Context newsletter and chief executive of Price Street Inc.

Oil’s boom and bust cycle is well known. When prices are high, companies dig new wells, buy new equipment and hire new employees. They do everything they can to extract maximum profits while prices are high.

But like everything else, oil markets are governed by supply and demand. Prices are soaring because there is not enough oil to meet demand. As companies produce more oil, this supply gap narrows and prices fall.

The world oil price fell in 2015 and remained low for years. He tried to rally in 2019, but then the pandemic hit. Oil prices crashed into negative territory and investors were knocked out.

“In addition to everything else, [Western Canada] was facing pipeline constraints and environmental setback,” Johnston said. “I think what you saw was a gradual transition to a decline in oil sands investment appetite under any given price scenario.

Higher oil prices are always a net benefit to the Canadian economy, CIBC’s Shenfeld said, but things are different this time.

“When caused by disruptions in the global economy, they are not as powerful as when caused by the strength of economic activity around the world,” he said.

As the price of oil has soared in recent months, oil companies have breathed a sigh of relief that they are finally showing profits again. Saudi Aramco posted a record profit of $40 billion in the first quarter of 2022. Canada’s Cenovus posted its best first quarter in its history with $1.6 billion in profit.

But the bust part of the cycle now weighs heavily on the minds of oil companies and their investors.

So will high prices stay? The past two years have been among the most tumultuous and volatile in modern history. It’s easy to wonder if things might have changed.

“As an economist, I have an allergic reaction to any claim that this time is different,” said Brett House, former deputy chief economist at Scotiabank.

He says there have been many rash predictions that COVID-19 has changed things forever. But more than two years later, those predictions have not materialized.

He says it’s clear the work-from-home phenomenon isn’t going away anytime soon, giving some consumers more choice over how long they commute.

“What’s potentially different is demand flexibility in response to high oil prices,” House said. “We are a little less inelastic than before.”

But if some of them did, it would reduce demand and allow the market to regain its equilibrium more quickly.

But it depends on our own habits. And as CBC columnist Don Pittis pointed out this week, even in the face of incredibly high gas prices, for now at least, Canadians’ driving habits are holding up.